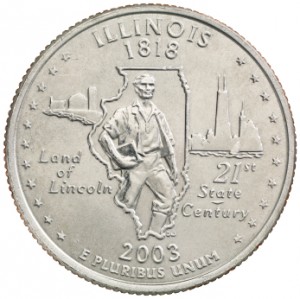 What I’m about to reveal I don’t like to bandy about. In fact, I try to hide it when in polite company. So I’ve got to ask you to please not breathe a word of what I’m about to divulge.

As embarrassing as it is to admit, I’m from Illinois.

I’ve lived here almost all my life and, like many other state residents, have watched in horrified fascination as over the past couple of decades, the state has steadily built its now unshakable reputation as the fiscal laughingstock of the nation.

Here in the Prairie State, four of our last seven governors have followed their stint in the Governor’s Mansion with another behind bars. (Illinois is the only state in the union where ex-governors make the license plates.) The state routinely spends more than it takes in, has the lowest credit rating of all 50 states, and has badly under-funded state worker pension plans and public education.

Illinois, along with New Jersey, leads the nation in the numbers of residents fleeing the state for greener pastures. The departures of those exiting Illinoisans place an ever weightier burden for generating desperately needed tax revenues on the frail and slender shoulders of those of us who remain behind.

Spinning in his grave

No wonder there’s a well-visited website featuring a caricature of the Land of Lincoln’s most-famous product, Honest Abe himself, with empty pockets turned inside-out and a grimace on his face. Its address: www.illinoisisbroke.com.

Some point to poor decisions by many of the state’s current and past political leaders as the reason Illinois is in such bad economic shape. I dunno about that, but there does seem to be one Illinois politico who has presided over the state for every year of its slalom into the financial abyss. I won’t mention his name here, but will merely say that each time he’s re-elected, everyone gets mad again.

Even though Illinois’ finances are an absolute horror show, and so bad they seemingly defy a solution, the state does have one thing going for it.

If you look at the areas where state leaders have blundered most ignominiously, they neatly line up with places where Americans in general have mismanaged their own personal and family finances, in every task from retirement planning to funding their children’s education to ensuring they spend less than they take in.

That means that Illinois’ abysmal fiscal situation can be put to good use, providing a wonderful example of what NOT to do in guiding the state of your own personal finances.

Let’s examine some of the fiscal atrocities Illinois politicos have visited upon the state and its people, and explore how those monetary miscues can help point folks everywhere toward the 180-degree opposite course of action.

Illinois’ biggest problem is likely its under-funded state pensions. Some experts report Illinois has more than $200 billion in retirement-related pension debt. As a result, the state is now in crisis mode, trying to figure out some way to pay pension obligations to state workers and teachers.

Lesson: If you see uncomfortable parallels between Illinois’ inability to adequately fund the retirement needs of its workers and your own underfunded 401k and IRAs, don’t feel so alone. Throughout America, many seem to use Illinois’ terrible example to guide their own retirement planning.

In fact, according to the Daily Ticker, 75 percent of Americans nearing retirement had less than $30, 000 in their retirement accounts as of 2010.

But you don’t have to make Illinois and other Americans your role model. Instead, start saving this very week, socking away a little on a regular basis and watching it compound, so you’ll have more resources when you retire.

A February 14, 2013 article in the State Journal-Register, citing figures from the National Center for Education Statistics, reports Illinois comes in dead last in providing the resources needed to educate children to high standards. While the other 49 states average 43.5 percent, Illinois provides just 28.4 percent of public education cost from state resources.

Ranking 50th out of 50 states surely means Illinois is adding to its K-12 funding, right? Wrong-a-mundo. The state has cut school funding each of the last two years.

Lesson: Were Illinois’ example practiced at your home, you would be putting away less than two-thirds what the other 49 families in your corner of town average in saving for college. Who would do that!? Avoid the Illinois example and start funding a 529 Plan while your kids are knee high to a prairie dog.

Lesson: It’s impossible not to accumulate cash for the aforementioned retirement and college expenses if you sidestep the Illinois example and always spend less than you bring home in pay.

Illinois offers dozens more examples of avoidable fiscal fumbling, so for an education on what not to do, visit www.illinoisisbroke.com and click on “News.”

Come to think of it, there is one thing the state got right, and that’s its nickname, “the Prairie State.” Prairies are flat, and so is Illinois.

3 Responses to “Avoid This Ill.-Advised State of Monetary Madness”