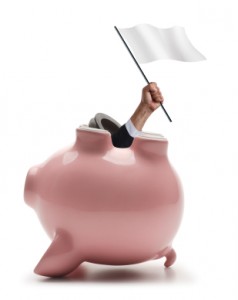 Not sure how I missed this, but the WSJ reported last week that Ally Financial recently failed one of the Fed’s stress tests. They tested the 18 biggest banks in the country and 17 passed.

Apparently their “Tier 1 Common” ratio came in too low (1.5% vs. a required 5%), though they have responded that the Fed’s tests are inherently flawed, arguing that:

“Ally continues to have strong capital levels and ample liquidity to support its automotive finance operations. In addition, Ally Bank continues to be a well-capitalized bank with a leading position in the market.”

And, indeed, they score quite well on other measures — e.g., their Texas ratio is a little under 3.5%, which is excellent.

I’m not sure about you, but I’m not particularly worried. We have a chunk of cash in Ally Bank CDs and we’re well below FDIC insurance limits.

While their rates aren’t quite as competitive as they used to be, the loyalty bonus when renewing CDs puts them back near the top.