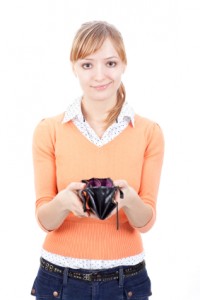 Over the weekend, I sat down to talk a bit about money with our oldest son. He receives a decent monthly allowance; he got some gift money for his birthday back in October, and he also makes money from random jobs like pet sitting, etc. Yet, he was broke… and more importantly, he wasn’t sure how it happened.

Obviously, the root cause was that he had spent all of his money, but he couldn’t figure out how or why it was all gone. The culprit? Mental accounting.

Related: 7 Tools for Tracking Your Money

All the while, they’ve been using the same windfall to justify their spending. In essence, they’ve been spending those same dollars over and over. That’s exactly what happened to our son.

He received some cash for his birthday, got his allowance, and made a few bucks taking care of the neighbor’s dogs. Suddenly, he felt flush. So, he downloaded a new video game. He downloaded a movie and a few songs from iTunes. He bought himself a new football jersey. He ordered an Airsoft gun. And suddenly he was broke.

In his mind, he had been justifying all those purchases with the same few dollars. And guess what? You can’t spend your dollars more than once. If you try, you’ll wind up broke — or worse.

So how can you avoid getting into my son’s situation? These tips should help.

Of course, if you’re dealing with cash, you literally can’t spend your dollars more than once. But if you’re using a cash equivalent — such as paying with a credit card, etc. — then it’s easy to lose touch with your spending.

In our son’s case, we were enablers. We covered some of his purchases when he had left his money at home on the promise that he’d pay us back. I paid for his video game download with my PayPal account on the same premise. And so on. He kept spending, secure in the knowledge that he had a ton of money.

Learn More: Cash or Credit — How Should You Pay?

But he didn’t have a ton of money. And by the time he paid us back, he was tapped out, having spent everything that he had taken in recently, as well as all of the spending money that he’d been saving up. Fortunately for him, we settled the bill before he went into debt.

Common Sense or Not, It’s Still A Struggle for Some

The lesson here is that impulse purchases add up. Fast. And it’s incredibly easy to let your spending get the best of you if you’re not keeping close track of things. Making mental notes, especially when you are feeling comfortable thanks to a recent windfall (like a tax return!) can be detrimental to your bank account.

As a general rule, we don’t lend our kids money to buy things they can’t afford, but we also leave it up to them to make their own spending decisions (within reason, of course). The idea here is to let them make mistakes while the stakes are low.

In our son’s case, hopefully he’ll learn from this experience and avoid similar problems in the future. I think, or at least hope, it worked this time around. He was pretty downtrodden when it came time to settle his bill. And when we talked about what had happened, he seemed genuinely chagrined.

Going forward, I’ll make a point of encouraging him to carry and spend his own cash so he’ll have a better feel for what he’s spending. And if you’ve fallen into similar traps in the past, I suggest that you try doing the same.

7 Responses to “You Can Only Spend Each Dollar Once”