If you didn’t hear it on the news, you probably noticed it the last time you filled up your car: gasoline prices have been dropping lately after holding fairly steady for a year or so, following world oil prices. 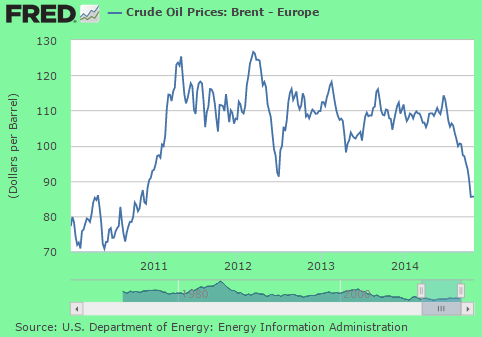 After clicking your heels at the gas station when nobody was looking, you probably got in your car and started wondering: Is this for real? How long can it last? Is this just one of those blips you can clearly see on the chart, or are we seeing a fundamental shift toward lower energy prices? If lower energy prices sound like a dream, that’s because, in our lifetimes, we’ve only see them go up. However, the notion of a long-term drop in energy prices may not be so totally far-fetched.

America has been the world’s largest producer of natural gas for a while now, and at record low prices. Common sense says the natural (no pun intended) thing to do is to switch to natural gas usage from liquid petroleum wherever possible. Doing that, though, is not quite as simple, because natural gas usage is limited by infrastructure: You need pipelines to bring the gas to where it is needed. The nation’s major railways are considering a wholesale switch from diesel fuel to natural gas … but they can’t until pipelines are installed to bring the gas to their refueling points.

There is one area where the switch has been happening, and that is home heating energy sources are shifting away from heating oil to natural gas.

For more than a decade, we’ve seen a myriad of initiatives, plans and efforts to reduce our use of oil in general, and imported oil in particular. This chart, produced by the White House from Energy Information Administration (EIA) data shows that we are currently importing less than 50 percent of our petroleum needs these days: 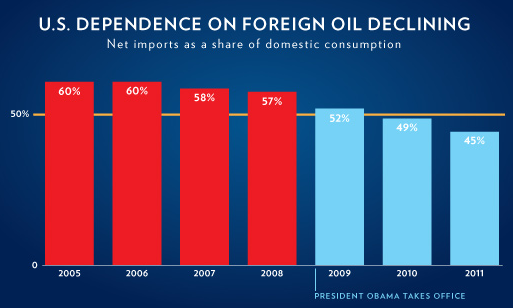 One of the biggest reasons for importing less oil is we are using less of it, regardless of where it comes from. This chart drawn from EIA data shows just how dramatic that drop is: 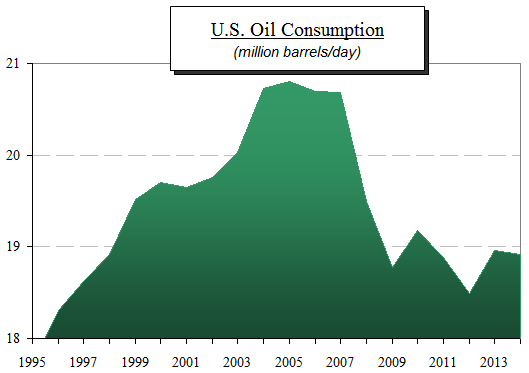 One of the biggest reasons we use less oil is the increasing fuel efficiency of automobiles sold in America. According to the EIA, average fuel efficiency has almost doubled from just over 15 miles per gallon (mpg) in 1977 to almost 30 mpg in 2013. What is remarkable about that is that the average horsepower per vehicle has gone up over the same period, not down — increased efficiency, indeed.

Oil is being pumped from more locations at more places around the globe. Even more important, though, is non-OPEC production sources are growing, giving OPEC less control over capricious price-setting. The USA, in particular, has seen its share of world oil production increase dramatically in the past few years, and it shows no sign of slowing down anytime soon.

However, even though America is the largest oil user in the world and its demand has been dropping, China, India and other developing nations are increasing their demand for oil, and that has kept prices from dropping.

But this year, that seems to have changed. For some reason, prices started plummeting during the summer months. What could the reason be? Could it be that demand somewhere suddenly started increasing?

If you dig a little deeper, it becomes apparent that we are witnessing a power struggle of enormous proportions. America’s oil production is increasing as it’s usage is dropping, and a lot of American oil is hitting international markets because the mix of oil we produce doesn’t suit our refineries. Saudi Arabia, concerned that crude oil production in the USA and other countries could be cutting into its revenues at a time when the Arab Spring is causing it to increase its domestic spending, is putting on an old-fashioned monopoly play. It is pumping out more oil to drive prices down, ignoring distressed calls from fellow-OPEC members to back off. As prices drop, the Saudis seem to hope the nouveau-riche oil producers will start losing money and be forced to quit. Their production cost is around $27 a barrel, while the US shale oil costs over $60 a barrel.

In the long run, those oil princes in Saudi Arabia, to cope with their post-Arab-Spring world, need or want oil prices of $100 a barrel or more. From all accounts, it seems they are content to push the price down for a short while just in order to flush out some of their producing competitors; but as soon as that mission is accomplished, this dip will be nothing more than a dip in a chart.

In other words, this is a high-stakes poker game, with billions of dollars at stake … and that includes what you pay at the pump. Will the Saudis succeed? They did before, as the first chart shows, and they have always managed to secure their billion dollar income stream from competitors. Time will tell, but, in the meantime …

What does this mean to you?

The general public has demonstrated a tendency to make long-term decisions based on the assumption that immediate circumstances will continue forever. In past years, when gas prices dipped, sales of gas-guzzling SUVs soared, and sales of energy-efficient smaller cars slumped. If that history were to repeat itself, you can expect to see sales of smaller cars, hybrids, and electrics to slump yet again. Along with that, you can expect those used car prices to drop too.

Therefore, you are entering a window where, if you haven’t done so yet, you will be handed a golden opportunity to fetch a good price for that SUV that keeps growling at your wallet whenever you pull into a gas station. Conversely, you can expect to see better and better deals on the gas sippers.

However, don’t make the mistake of thinking lower gas prices are the new normal. A few oil princes in Saudi Arabia are playing a game, which will end soon.

As they say in show business: “Stay tuned.”

3 Responses to “Why lower gas prices are fleeting”