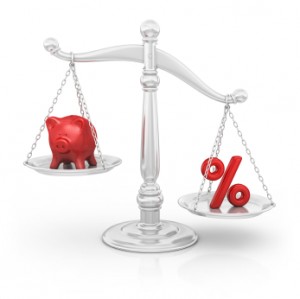 Are you tired of earning a pittance on your hard earned savings? Not too long ago you could earn 3%, 4%, 5% or more by sticking your cash in a high yield savings account. But today? Not even close. Interest rates now top out in the low 1% range, and it seems like there’s no light at the end of the tunnel.

So what’s a savvy saver to do? Well, you could just accept the low rates as an unavoidable consequence of the current economic landscape, or… You could get creative and get at least a bit more bang for your buck. Here are three ways to get a better rate for your savings.

While savings accounts were once home to the highest interest rates, checking accounts are now getting in on the action. Be forewarned that you may have to jump through some hoops – like setting up direct deposit and making a minimum number of debit card transactions per month – but if you’re up to the challenge, you can score a great rate.

For example, MoneyRates.com currently lists reward checking accounts with rates as high as 5.01% APY. Note that many of these offers are regional, so you may have to shop around a bit, but there are some killer deals out there for the taking.

I’ve mentioned this one in the past, but if you can find a bank with a low penalty for early withdrawal, you can use long-term CDs to get a higher interest with minimal downside risk. For example, Ally Bank has a 60 day interest penalty if you break their CDs early.

Given that Ally’s five year CD rates are paying roughly double what you can get from an online savings account, the break-even point is roughly four months. Beyond that point, you’ll come out ahead relative to having your money in a savings account, even if you have to access the money before the CD matures. And if rates rise dramatically, you can simply break your CD and re-invest.

If you go this route, here’s a tip: Split your money into multiple CDs. That way you can access just a portion of it without paying a penalty for early withdrawal of the full amount.

Another solid option is to use Series I savings bonds, which are inflation-indexed bonds offered by the U.S. government. Rates on I bonds are updated semi-annually in May and November. As of right now, newly-issued I bonds are paying 4.6%, though that number will fluctuate over time depending on the inflation rate.

Beyond offering a decent interest rate (at least relative to a savings account), interest that you earn from I bonds isn’t taxed until redemption (i.e., it’s tax deferred) and it’s also exempt from state income taxes – as well as federal taxes if you use the proceed to for eligible education expenses.

But don’t get greedy…

And now… A word to the wise. In general terms, if you’re holding cash, you probably want if to be both safe and reasonably liquid. You should thus avoid locking it up or taking unnecessary risks with it. In this vein, I would recommend shying away from things like peer lending.

While outfits like Lending Club tout 8-10% annual returns, and you sometimes see them mentioned in discussions related to improving your interest rates, the reality is that they are neither risk-free nor liquid. While investments like this may have their place in your portfolio, they’re far from being a cash equivalent.