Do you think it’s a good idea to get away from fossil fuels for our energy needs? If so, you’d be one of millions. Fact is, we are totally dependent on energy for our daily lives, especially electricity. (You can’t read this post without electric power, for example.)

Where Does Power Come From?

Most electricity, by far, is generated with fossil fuels: coal, oil and natural gas. However, this is unsustainable in the long run, as we all know by now. In recent times, new methods of generating electricity have been taking root with processes that rely on sources which:

Three new processes of generating sustainable electricity have been attracting more attention in the past decade (hydro-electricity presently is the oldest and the largest renewable energy source):

(The difference between photovoltaic and thermal is that the former turns the rays of the sun directly into electricity which can be used for anything, while solar thermal is limited to heating water or air.)

Wind energy output has tripled since 2008, according to the American Wind Energy Association, although it’s from an admittedly small base. In 2013, wind energy made up 4 percent of all U.S. electricity generation, but a full 30 percent of all new generating capacity.

In comparison, solar is still small potatoes, as this chart depicting data from the government’s Energy Information Administration shows: 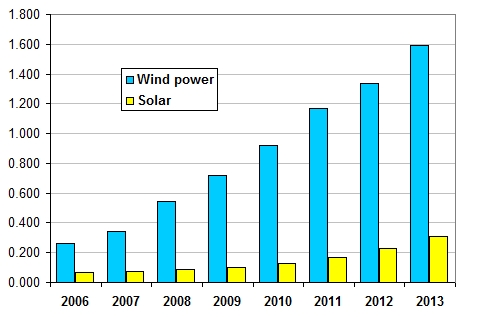 Although wind energy output tripled since 2008, photovoltaic (PV) solar energy generation is growing much faster at the moment because its costs are dropping at the rate of about 15 percent per year.

Speaking of cost, clean energy costs much more than old energy, and that’s one of the biggest impediments to widespread adoption of alternative energy generation these days. Hydro-electric power is the cheapest sustainable energy source, but environmentalists have pretty much put the kibosh on the construction of new dams. In addition, wind and solar remain much more expensive alternatives to traditional fuels.

Cost isn’t the only deterrent

Then there is the issue of storage. Electricity is generated as it is needed, and what’s not used is wasted. That means your utility has to anticipate when you will turn your computer on so the power is there for you. (And yes, they actually do track that. Interestingly, they’ve noticed that tablets and smartphones have reduced legacy computer current usage.) The point is that any extra power they generate is lost forever. Over the years, utilities have become good at load management, relying on stable, low-cost, fossil-fueled power plants. They have “base load” generators which run round the clock, plus additional generators which come on when more electricity is needed and are shut down when demand subsides. These new renewable energy sources present a problem, however: You may not need the power they generate the moment the wind is blowing. The situation is reversed when a cloud passes over a solar installation, reducing the amount of energy generated and available at the very moment you need it.

Energy storage is the next biggest problem (after cost) for wind and solar power. That’s why Abengoa’s new Solana thermal solar power plant is significant — it comes with energy storage built in, which allows it to generate power for six hours after sunset. Time will tell if the benefit of storage will outweigh the cost involved and if this becomes the future for clean energy generation.

How does this impact you?

1. Expect to pay more: Clean energy costs more than “dirty” energy, and those costs will be passed on to consumers as clean energy supplants traditional power sources.

2. Expect complications: The lack of storage, and the variability of the new sources of energy, will expose you to more power shortages when the weather conspires to deliver “whammies” every few years. As the nation transitions to cleaner power, your need to prepare for power outages will increase.

3. Become self-sufficient: As the cost of household electricity continues to rise and the price of solar energy continues to drop, it makes more and more sense to consider adding solar (thermal or PV) capacity to your house. Geothermal energy and even residential wind turbines are other options to consider. Whichever technology you choose, this investment will show returns which increase every year.

The biggest downside to adding clean energy to your home is, of course, the initial investment. The numbers range from below $10, 000 to over $100, 000, and depend on a whole host of variables such as the amount of power you want to generate, how you want to store your energy, whether you want to maintain a connection with the power grid, and so forth. I was intrigued to observe that the number $30, 000 seems to pop up more than any other … for just about any clean energy option.

That’s obviously more than your daily Happy Meal at McDonald’s. In order to encourage homeowners to make this investment, the government has offered various incentives, and can probably be expected to offer more in the future. That obviously reduces the up-front cost. How quickly you earn that investment back depends on your current energy usage and your passion for a clean earth. Worst case, though, you can probably expect to get the cost back when you sell your home.

If you live in communal housing (condos or tracts with strict homeowners association rules) your ability to make the world a cleaner place may be limited. However, as electricity costs continue to escalate, we can probably expect to see new construction projects that include some form of clean energy, which is actually more cost-efficient on a per-unit basis when installed in clusters, and may significantly increase the marketability of those units.

Bottom line: In 20 years’ time, you can expect to see the “cleanness” of electricity generated in America rising significantly and, with that, its cost. That rising cost should make any investment in clean energy sources for your home energy well worth it.