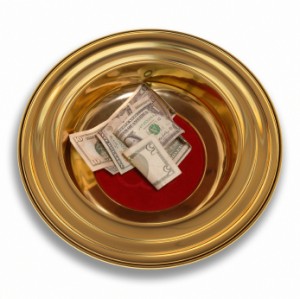 Give and you shall receive. This Biblical saying has been well-used and mis-used so many times that I’m sure no one could count. I grew up in a very conservative Baptist household and, while I don’t think we always gave a flat 10%, giving was a constant, even in our poorest times. We did receive, too; my father was a missionary, and for many years we lived from the tithes of others.

Whatever your opinion is of proselytization, I am grateful that my sisters, brother, and I were fed and clothed for those three years. It would have been pretty hard to get here, otherwise.

My parents are still very religious, and sometimes when I visit they watch televangelists whose names you’ve probably heard. There are a couple of lines of reasoning that these preachers take, but the one I’m most fascinated with is the idea that giving (to them, largely) will in turn make you wealthy.

I’m going to set aside the assertion that giving to a television pastor will make you rich. Matters of spirituality are, by nature, anecdotal at best. For every entrepreneur who gave 40% of his salary and had it returned to him richly, I’m sure you can find another guy who gave 50% and is now homeless.

I’m more interested in the scientific truth behind this.

Give and you shall receive. On a one-to-one basis, this is actually true. It’s called the Rule of Reciprocation, and the idea is that if you give something to someone, they will feel obligated to give back. It’s why political donations are so compromising, even for very idealistic people.

Even though an office-holder’s intention may be to act on their principals, it’s hard-wired into us that giving back to reward generosity is part of the social contract.

Research shows that you will receive if you give

One researcher picked a bunch of addresses at random and sent out Christmas cards. He didn’t know any of them and they didn’t know him, either. A third of them sent cards back to him, many of them with long Christmas letters and handwritten notes; even letters. Some of these cards kept coming for decades.

Other researchers have worked with restaurant tips and the Hare Krishnas. I know, those seem pretty far apart! But both use the same principal to get money from people.

Studies have shown that tips go up more than three percent if a mint is put on the tray along with the check. But when a second mint is given directly to the customer, telling them that the mint is specifically for them, tips go up 20%.

And you may remember the Hare Krishnas, who stood in airports handing out “gifts” — flowers, books, or magazines. Only after the gift was given and received would they ask for a donation. People gave it; but, often, not happily.

Charities use this principal too. If you’re anything like me, I’m sure you have a drawerful of free address labels somewhere. I have a bunch from the Southern Poverty Law Center, and the Nature Conservancy. These labels, says psychologist Robert Cialdini, cost about nine cents to produce. But they double the “hit rate”; the number of recipients who give to the charity after receiving the ask letter.

Foreknowledge is power (sort of)

I listened to the radio report about this rule right around Thanksgiving, and then I went forth into the world feeling smug. Not only could I use the knowledge to help get donations and subcriptions for my own non-profit, a literary magazine, I could also use it to avoid getting sucked in to pitches I didn’t want to (or couldn’t afford to) reciprocate, myself.

I would simply remember the rule and the nine cents and make my giving budget entirely apart from the little gifts I have been given. I would not feel guilty for not talking up the ballet to which I was given comp tickets. I would not give to charities just because of the labels!

And then I was walking out of a bookstore after a run, flush from payday. Outside the bookstore was an attractive young man with a nice smile and a pitch for the Southern Poverty Law Center. “Oh, I admire your mission!” I said, thinking of those labels at home. I’ve even used them. “But I can’t afford another monthly contribution.” He kept talking. He was so charming and earnest. He spent five minutes with me, or more.

You can guess the end, right? I gave him $10. You can bet I’ll stay on the mailing label list, ripe for the reciprocating for years and years to come.

But when I saw him and another canvasser (also young, attractive, and charming) outside the co-op two weeks later, I said “no!” and I meant it, and scurried off on my bike before they could suck me back in.

They call it “Karma”: the concept of cause and effect, if one sows good one will reap good. Give to the universe and the universe will give back. As it turns out, it’s true, but it’s more specific in most cases; if you give to Joe Guy, Joe will probably want to give back to you. “Pay it forward” works too; the more you give the more others are inspired to give. Let’s all go hug someone!

That said, this is personal and individual. Walmart will not love you for shopping there and so give you a special discount on flat screen TVs. Mercy Corps is not going to see my individual donation and think, “Oh gee whillikers! Sarah is such a nice girl. Let’s send her double address labels next time.”

This works one-to-one, mano-a-mano. And if you’re in any sort of position in which sales or persuasion is helpful — and that’s most of us, frankly, even those of us who work in cubicles have to sell ourselves to our bosses as being worthy of promotions/raises/continual employment — giving will help you get.

Has this worked for you? What have you given that has proved the concept? When have you fallen for the rule of reciprocation when you knew you really shouldn’t? I’d love to hear your stories.

3 Responses to “The Rule of Reciprocation: An Introduction”