I love a good fight — don’t you? The latest fight I’m enjoying from the sidelines is the gold fight of 2013.

Gold, it seems, has the power to elicit more raw emotion than any other investment. On one hand, it’s been around thousands of years — far longer than any other investment. On the other hand, it doesn’t yield dividends or interest, and it doesn’t grow in its ability to produce income. In fact, it doesn’t produce any income at all, making investor purists scoff that gold “isn’t a real investment.” But it has appreciated (at least some of the time) and anything that appreciates interests investors.

In one corner of the debate are the so-called gold bugs, who say gold will only rise in value. In the other corner are the gold bashers, saying the bugs delude themselves with “the narrative.”

What’s a narrative? Nothing but a story. So the bashers say the gold bugs hang their investment hats on… a story.

What’s that story? In a nutshell: only gold can withstand unstable governments, inflation and upheaval, social or economic. And, according to the gold bugs, we live in times ever more uncertain, and the dramatic rise in the gold price shows more smart people are getting it.

However, the gold price has dropped more than 25 percent this year, and that has brought both sides out of their corners, swinging. 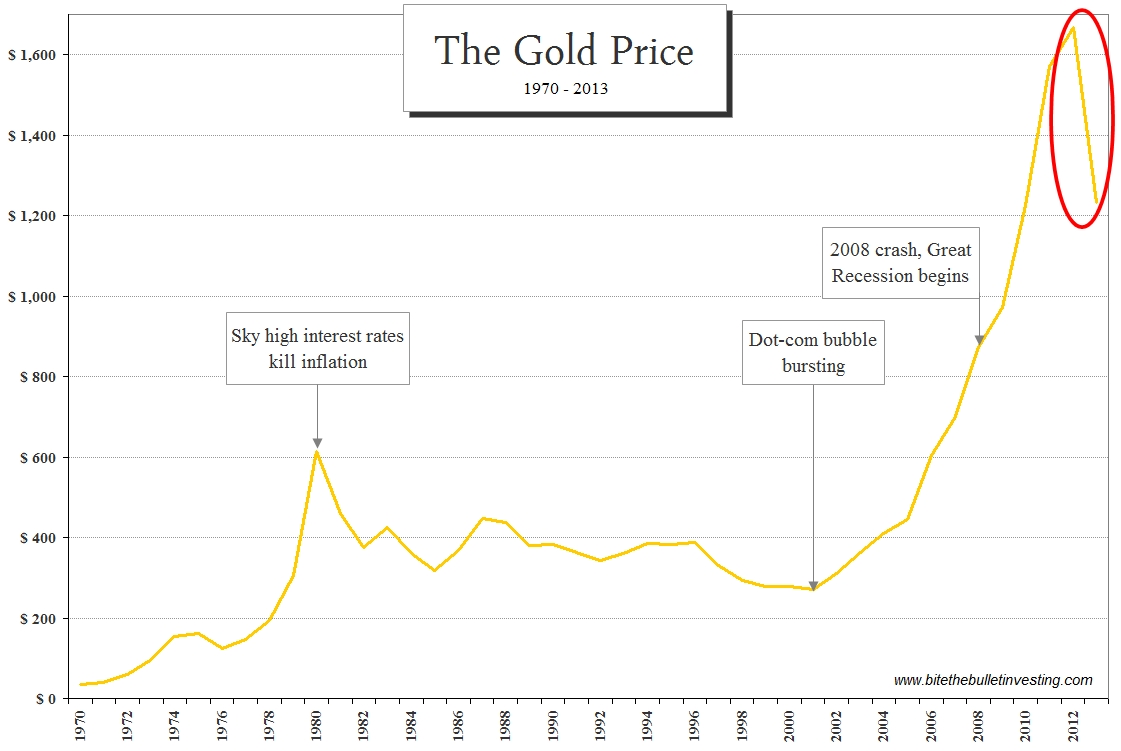 For the bashers, Barry Ritholtz wrote a scathing article,  The 12 Rules of Goldbuggery, in which he accused the gold bugs of burying their heads in the sand to avoid admitting that the narrative has failed, because they can’t explain why gold lost 25 percent of its value in half a year.

The gold bugs, not surprisingly, responded with a withering rebuttal, anchored by large governments incurring levels of debt unparalleled in the history of man. Sooner or later, they say, that debt will cause upheaval and when that happens, you’ll be glad you have gold.

Time even weighed in on the fight, calling it The Golden Bloodbath of 2013.

Watching a fight like this is not only fun, it’s educational: both sides are pushed to the limit to explain the reasons for their beliefs. Best of all, it forced me to do some research of my own, which uncovered something both sides seem to overlook.

The first run-up in the gold price happened from 1970 to 1981, a decade of ridiculous inflation. The chart confirms the narrative working as advertised: high inflation = gold price rising.

Then Paul Volcker killed inflation with sky-high interest rates, and America had 20 years of stability, low inflation, and high growth. While the S&P 500 soared from 100 to 1, 500, the gold price languished and actually went down a little. The narrative held, if only in the negative.

Economic cycles are relentless, and the bursting of the dot-com bubble sent America into recession. Again the narrative held as the gold price took off.

The economy recovered after the dot-com bust, as it always does,  but this time the narrative didn’t hold. Instead of the gold price remaining steady or even dropping, it kept climbing. This rise didn’t line up with the narrative as before, but the gold bugs didn’t care. Any rise is a good rise and, for them, requires no further explanation. “See, we were right all along!”

The bashers didn’t have an answer, because how can you dismiss such a dramatic rise when it’s right there?

In the same way, the narrative can’t explain the drop of 2013. This time it’s the bashers crowing, “See, we told you all along!” and the gold bugs are left with not much more than their old standby, “Just you wait.”

What both sides seem to have missed is a new element introduced around 2003: exchange-traded funds.

Before 2003, the only people who could own gold in any significant quantity were governments and super-wealthy individuals. Physically owning gold is cumbersome. It’s heavy and valuable, requiring specialized storage. In days gone by, the wealthy stored their gold in bank vaults, but after Franklin D. Roosevelt literally confiscated all that gold in 1933, and outlawed gold ownership, owning gold became even trickier.

That changed with the introduction of gold ETFs around 2003. Through an ETF, anybody, including you, can own a slice of a gold bar, because the ETF buys physical gold bars for all the dollars invested in it.

While each individual might not own much, together they added an enormous new chunk of gold ownership. GLD, the largest gold ETF, physically owns more gold now than anybody except the four largest governments in the world! And that’s just one of the ETFs.

However, this is ownership of a kind gold has never seen before: empowered fickle individual investors. If you own a few bars of gold, buying and selling is a cumbersome and slow affair, rendering the investment illiquid to a large degree.

No longer. A few clicks of the mouse and voila! Your gold ownership doubles or vanishes in a second or two.

Nobody includes this new development in their debate over future gold prices.

In the final analysis, gold has only one value: what other people think it will be worth in the future. When you invest in gold, you’re saying: “other people will reckon this stuff is worth more than it is now.” Gold never has had any other value.

The narrative, as it stands today, looks similar to the eighties:

The narrative, then, dictates that gold prices should be stable, and possibly even declining.

We know there will be another recession; those come every 7-10 years. The dollar will decline again, it always does. Inflation and social upheaval are wild cards: they may or may not happen. Put together, that means the gold price will go up again… at some point. It may be next year, it may be twenty years from now.

Until then, though, the ETF demand growth seems to be in the throes of stabilizing itself. If that continues, we could therefore continue to see the gold price decline further. If that happens, fickle individuals and hedge funds may abandon the metal and the price of gold will continue its slide until the next disruption.

What do you think? Are you a gold bug or basher?