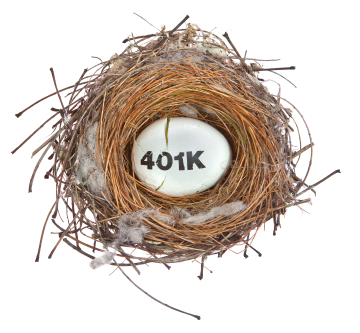 About three weeks ago, I wrote about rolling my SEP-IRA holdings (all of which are tax-deferred) into a Solo 401(k). My primary motivation for doing this is to get my pre-tax retirement holding into a so-called “qualified” plan so I can convert non-deductible Traditional IRA holdings into a Roth IRA with minimal tax consequences.

Once again, if you’re not sure what I’m talking about, here are a handful of older posts that describe the issue in more detail:

Back when I first talked about this, I noted that I was opening my Solo 401(k) with Fidelity because they’re willing to accept a rollover from an IRA into a Solo 401(k). The first step in the process was to fill out (and submit) a plan adoption form along with an account application.

The next step was to get the money out of Vanguard, where I’ve been holding my SEP-IRA, and into a Rollover IRA at Fidelity. The reason I went this route is that Fidelity can’t accept a direct, trustee-to-trustee rollover into a 401(k) from an outside vendor.

In other words, I either had to do a “double rollover” or request a check from Vanguard and then do a 60-day rollover on my own. Since the trustee-to-trustee rollover is a cleaner solution when it comes to IRA reporting requirements, I decided to Fidelity two-step is actually the simpler option.

The good news is that I was able to do these initial steps simultaneously. That is, I submitted the plan adoption and account application paperwork at the same time that I initiated the rollover. The only wrinkle here was that I needed to stop by the bank for a “Medallion signature guarantee” on the rollover paperwork.

My new Solo 401(k) was created quickly, and I received word last week that the Vanguard-to-Fidelity rollover was complete. In other words, it was time for the last step… The IRA-to-401(k) rollover.

To complete this final step, I needed to fill out and submit the IRA Single Withdrawal Request form along with a letter from me (as the plan administrator) stating that I was willing to accept the IRA rollover into the 401(k) plan.

I filled out that form and drafted the letter over the weekend, and will head to the bank shortly for another signature guarantee. From there, it should only be a matter of days before the entire process is complete. A bit complex, but actually pretty easy, and well worth the trouble since I’ll now be able to beef up my Roth IRA.

Throughout this process, I’ve been very impressed with Fidelity. Their reps answer the phone quickly and are always well informed. Beyond that, I’ve been notified via e-mail every step of the way so I’ve never been left waiting or wondering.