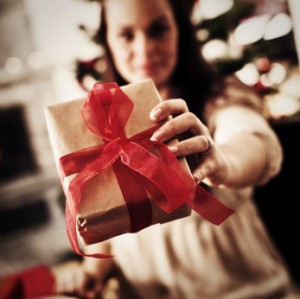 The story’s unfolded countless times, with many variations. The recipient of a thoughtfully wrapped holiday gift tears off the shiny paper to find a lovely present, and as she’s casting the gift box an admiring glance, a card tumbles onto her lap.

“How nice!” she thinks. “The gift-giver cared enough about me to include a hand-written card with this very considerate gift. Let’s see what it says.”

She examines the card, and with a dawning reception as frosty as that given a mold-encrusted fruitcake, finds it’s addressed to someone else.

It’s then she realizes that rather than investing time and effort considering her tastes and interests, scouring stores selling gifts matching those preferences, plunking down good money for a purchase specially for her and lovingly gift-wrapping the present, the “giver” had reached into a dank closet, blown the dust off an unopened trinket given him or her months or years before, and pawned it off on her.

The giver had re-gifted.

And if on hand for the present-opening festivities, he or she was likely scanning the carpet for a trapdoor through which to scurry.

Sound familiar? Perhaps you witnessed something like this on Christmas morning. Or perhaps you received a gift that has you thinking about re-gifting in the future.

Re-gifting is a practice that can save you tons of time, effort and money every time the holidays roll around. And even though it carries a connotation as festive as a drunken Santa, people still fall under the spell of the re-gifting temptation.

That may be why there’s a bit of revisionist thinking going on about re-gifting, with some observers arguing that, given the right time, occasion and rationale, it’s okay to re-gift. And as we shall see a bit later, a number of progressive charitable endeavors, such as Western Union’s “Gift of Possibilities” holiday campaign, are actively encouraging re-gifting.

“It’s better to give than to receive, especially when the gift you received isn’t something you want, like, or need, ” notes Vicky Oliver, the New York City-based author of The Milllionaire’s Handbook: How to Look and Act Like a Millionaire, Even if You’re Not. “It’s a shame to throw away perfectly good new items when someone else might really appreciate them.”

If you are intent on re-gifting, do it the honorable and honest way, Oliver argues. “Personally, I think it’s okay to confess, ‘A friend of mine gave this to me, and I immediately thought of you, ‘” she says. “If you do that forthrightly, I think you’re showing that you thought of the recipient. The whole problem with re-gifting is it shows no thought. But if you demonstrate that you did give it some thought, that you sincerely considered that person you’re giving to, it takes the curse off.”

Say for instance that you loathe the book your sister-in-law gave you. Don’t just pass it on mindlessly to a friend. Sit down and think of someone for whom that book would be a nice fit, even if the person isn’t on your holiday gift list. Consider it your way of bringing together the right gift and the right gift recipient.

Here are some additional suggestions from the fertile mind of Oliver.

The right packaging says so much. Fashionable gift bags and boxes, as well as ribbons and other enhancements, can be had for a song, and permit you to add your own thoughtful touches to a re-gifted present. The re-wrapping adds value and a little highly-appreciated holiday flavor, Oliver says.

“Wrap the unwanted perfume, picture frame, or knickknack in some knockout packaging, and your ‘re-gift’ will gain an instant face-lift, ” she advises. “While you don’t want to intentionally deceive the recipients, it doesn’t hurt to make their gifts look elegant and ‘just bought.'”

Noteworthy notes. A re-gifted holiday remembrance is better received if accompanied by a card you write, in which you express your appreciation and offer a glimpse into the thinking that went into this gift presentation, Oliver says. The recipient knows you really thought about him, and appreciates the gesture all the more.

Signature qualities. Sometimes, a gift you receive will immediately evoke thoughts of someone else’s trademark style. You might kind of like that purple sweater you got as a birthday gift, Oliver says, but you know someone else for whom purple is a signature color. Re-gifting that sweater to one with palpable preferences for purple should be seen almost as a duty, not an afterthought.

Doing good. We all receive gifts we can’t use, but that could be enormously useful to someone in need. That was part of the thinking behind Western Union’s “Gift of Possibilities” holiday campaign, which included the Western Union Gift Exchange Tour at a number of malls around the country.

Gifts (unwanted or otherwise) were collected and donated to local Goodwill stores.

So if you’ve received a gift you don’t want and you’re not comfortable re-gifting to someone you know, consider passing the gift on to a charity.

You just may be surprised to discover that re-gifting is uplifting.

3 Responses to “Pay It Forward by Re-Gifting”