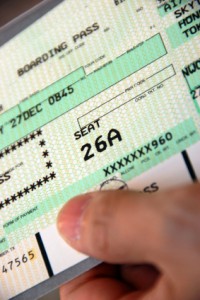 Airlines have long asked for volunteers to give up their seats when a flight is overbooked. But when checking in for a flight recently, I was greeted with a new twist…

This was for a flight on Delta and, as I was going through the online check-in process, I was greeted with a screen soliciting bids from potential volunteers. It said:

“We are seeking volunteers willing to take a different flight in exchange for a travel voucher redeemable within 1 year on delta.com. Your existing itinerary will not be changed until you review alternate flights at the departure gate.”

This is a very smart move on Delta’s part, as it makes everyone aware of the possibility of giving up their seat as far in advance as possible. And it also pits interested parties against each in a reverse-auction format.

In the past, requests for people to give up their seats were typically made at the airport, often shortly before departure. They would then proceed to gradually raise the stakes until they had enough volunteers.

But with that approach, they were missing out on travelers who didn’t get to the gate in time, and they were also reducing the odds that someone would be willing to give up their seat by making the offer at the last possible minute.

With the new format, they’re involving as many people as possible and doing it as early as possible. Thus, they’re giving more people more time to make contingency plans. Yes, you have to show up ready to fly, but still… Having time to get your head around the possibility of changing your travel plans is a big deal.

And they’re also setting a distinctly different tone by asking people to compete for the right to give up their seat, along with an explicit notice that they’re looking for the lowest possible bids. Thus, there’s no longer a temptation to hold out and see if they might offer more. Rather, you get one shot to make a strategic (and hopefully [in Delta’s eyes] low) bid.

I’d be curious to see the data, but I’m pretty sure they’re buying people off for less than it used to cost, and are also reducing the odds of a last minute seat crunch.

What about you? Have you ever given up your seat(s) on an overbooked flight? If so, what did you get in return? And were you happy with the decision?

5 Responses to “Overbooked Flights and (Reverse) Auctioning Your Airline Seat”