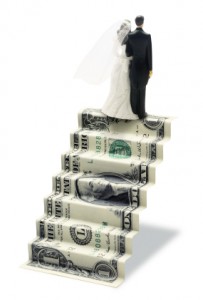 With Valentine’s Day in the rearview mirror, I’m thinking about love. Love, and money. Robert Brokamp at Get Rich Slowly was part of my inspiration, with his sweet and personal take on his “relationship deal breakers.”

(A brief summary: when he was 23, smoking; now, fiscal irreponsibility.)

Though many of us reading this site are, indeed, already partnered with no immediate plans to go off in search of new loves, I think we can all use a little time to contemplate the problems of finding love and putting it together with the economic part of marriage.

Economics as the social foundation of marriage

When it comes right down to it, marriage was historically far more about money than it was about love. Marriages were alliances; marriages were promises to provide together for the upbringing of children. No woman in the 1500s would have thought to herself, “if only I could negotiate a maternity leave from my job as wheat-harvester!”

Marriage for women meant, not just a husband to look after you, but also participation in a community, where your in-laws and neighbors would help take the load when your babies were small. And when you married, you married into a certain class; unless war or famine or plague tore your world to pieces, what you saw at 16 was what you would get at 60.

Even our tax system is still built on the concept that marriage is about economics, with dollar-value allowances for marriage and children. And yet, as Robert points out (anecdotally), there is none of the social stability that existed in centuries past.

We usually marry for love today, which is good, because marrying for money is decidedly untrustworthy.

Unless you’re marrying into a wealthy family (which has its own pitfalls), it’s difficult to look at the financial situation of a to-be spouse in your twenties, and predict with any reliability your combined financials come age 55.

It’s like predicting the “synergies” of two companies about to merge; when you’re putting the deal together, everyone only wants to look on the bright side. Any negatives are “market forces” and have nothing to do with the inherent differences of two different individuals. Right?

Well, wrong, of course. So how can you predict the unpredictable? I’ve had ten years of marriage and a near-decade-long previous relationship to think this over, and here are some of my thoughts:

What do you wish you’d assessed before partnering? Or did you make all good choices? (Lucky! Smart!) I’d love to hear your stories.

5 Responses to “Marrying for Love and Money”