It’s worth being educated about your rights if you’re looking for a new job. With luck, you won’t need to worry; if you’re asked a question in an interview that makes you feel uncomfortable, though, it can be helpful to know whether your potential new boss just overstepped the mark. That way, you can respond accordingly. 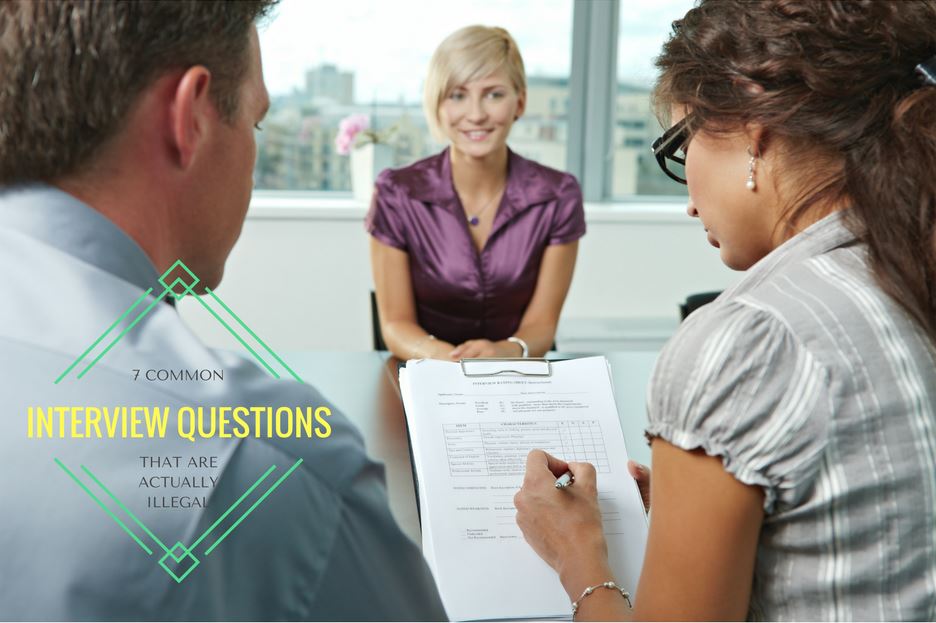 We have all heard the stories of interviewers asking questions so screamingly wrong, they make you wince. These often involve asking a female candidate whether she’s planning on having more children, or whether her kids are regularly sick and require her to stay home with them.

However, there are plenty of other subtle ways an unethical employer can get the information he or she wants. That’s why it’s a good idea to understand the principles around what you can — and cannot — legally be quizzed about in your interview.

What the Law Says

Most often, certain areas are out of bounds in an interview setting simply because of the risk of actual (or perceived) discrimination. Of course, most businesses just want the best employees they can find, regardless of race, gender, or age. The sad truth, though, is that some bosses — consciously or subconsciously — recruit according to their unfair personal bias. That’s why anti-discrimination laws are in place in many countries, reassuring job seekers that decisions will ultimately be made solely based on their ability to perform the role.

The exact details of the legislation, and how it is put into practice, vary from place to place. In America, there are anti-discrimination laws at both federal and state levels. In the UK, the Equality Act covers most aspects of workplace discrimination. However, the basic principles of the law are similar, in the US as well as the UK, Europe, and many other developed nations.

US Federal law describes protected classes, which essentially means that workplace decisions can not be made based on characteristics such as race, color, religion, or gender. Other areas covered include your country of origin, what citizenship you hold, your age, and any disabilities you may have. The US Equal Employment Opportunity Commission details the full list of protected classes, although it’s worth noting that, in most cases, the rules apply only to employers with 15 employees or more.

Many experienced managers will interview following a more standardized process, avoiding any pitfalls gracefully and asking only the questions that are relevant to the job. But every now and again, a question might come up which makes you feel a bit uncomfortable. Maybe you think that the employer is fishing for an incriminating answer or prying a little too much into your personal life.

Let’s talk about some questions that get asked all too frequently, but really shouldn’t be asked at all.

Questions to Watch Out For

It’s a fairly common question, and might even come up in small talk as you walk to the elevator with your interviewer. However, it is also a way for an unethical boss to try and figure out your sexual orientation, and to guess if you have (or may eventually have) kids.

If you’re asked about your marital status in an interview, you need to make a personal call about what you are willing to share. If you’re wearing a wedding ring, or bring up your recent engagement on your own, then your interviewer is probably genuinely trying to build rapport, and follow your cues. However, if you’re not happy with the context of the question, you could shrug it off with humor. Responding, “Why, are you asking?” with a smile should do the trick.

This is another wholly natural question, in typical context. Unfortunately, it can also be used to try to figure out if you will be able to work overtime or travel, for example. Your gut will be the best measure of whether this query comes from a simple desire to chat about common ground, or something more sinister.

If you’re asked this and it feels off-kilter, it may be because there are specific job requirements which the interviewer is concerned a parent might not be able (or willing) to fulfill. These include international travel or late night/weekend hours, for instance.

You could probe the interviewer about why the question was asked. Start with a clarifying question such as, “Is it important for the role?” If there’s a genuine reason for inquiring based on the needs of the job, you can just confirm that you understand the requirements and will be able to deliver.

3. What country are you originally from?

An interviewer might pick up on a slight accent, or make an assumption about your cultural heritage based on your name, appearance, or dress. But asking about your nationality or citizenship is not actually allowed.

What employers can ask about is your right to work in the country. In fact, it’s their legal duty to do so before a contract is offered. So, if you’re asked about your nationality, but don’t want to share, don’t be defensive. You can simply say that you have the right to live and work in this country, and that should suffice.

While few employers will outright ask your age in interview, they might use variants like asking when you graduated, when you expect to retire, or how long you’ve been working.

Related: How to Write An Eye-Catching Cover Letter (and Why It Matters)

If you think the interviewer is trying to figure out your age because they might refuse to take on someone based on this detail, then be wary. Luckily, most questions of this type can be sidestepped with grace.

If you’re asked how long you have been working, for example, you can focus on the relevant experience you hold rather than overall working history. Respond by saying something like, “I have ten years of active engagement in this industry.” It’s useful to know that anti-age discrimination rules typically give more protection to people over forty.

This is a somewhat ambiguous question, as the intent of the employer (in most cases) will be good. Of course, they’re concerned that you have thought about the commute to your new job — maybe they would even be able to support you by suggesting a carpool.

However, this is a question that can put an employer on shaky ground if they appear to be fishing for details of your socioeconomic status, like whether or not you own a car. This might trigger some unconscious bias in the recruiter (typically, people prefer to recruit others “like them”), or be based on discriminatory practice. It would be unethical — and in many places illegal — if, for example, an employer insists on you owning a car. This is especially true if the job role doesn’t actually call for it, but is simply due to the perception of wealth and class associated with owning your own wheels.

Resource: How to Use Your Commute to Further Your Career

So, what if this question comes up and you’re uncomfortable about the motivation? You can just answer that you are confident in your ability to fulfil the job requirements, and that you have reliable transportation (only you need to know whether that’s a personal vehicle, bicycle, or even the bus).

6. Did you ever get arrested when you were younger?

The key detail here is that getting arrested is not the same as being convicted. In the unlikely event you’re asked about any arrest history, you can decline politely to answer. In some cases, however, you might need to declare actual convictions. The law varies from place to place, so make sure you read up in advance if you think this question might affect you.

In the UK, for example, it varies. Some convictions always have to be declared, some just for a defined period of time, while others do not ever have to be shared with a prospective boss. Either way, an employer is still bound to make a recruitment decision based on your actual ability to do the job now, rather than any misdemeanors in the past.

If you know your new job will require you to have a background check, which will turn up any criminal activity, it might be in your interests to talk about it upfront, anyway.

7. Are you financially solvent?

This is a question which can be legitimate, if it matters for the specific role. So, for example, if you’re looking to work in financial services and have previously declared bankruptcy, this might be a problem. However, in the vast majority of cases, this is not a material issue which impacts your ability to do the job. Feel free to avoid the question, or dig deeper with the interviewer to try to understand why this matters to the role in hand.

What if you’re asked something you shouldn’t be?

These are just a few examples of common questions that may make you wary. Of course, there are many different ways to say the same thing.

If any question you’re asked doesn’t feel right, you should stop and think a moment before answering. There are many somewhat-suspect questions which may simply be intended as small talk, or to get to know you on a more personal level. The real issue is the motivation behind the inquiry. If you believe that the answer might be used in a way that feels unfair, then you might want to avoid answering, or ask for clarification on why it’s important to the role.

In the vast majority of cases, your interviewer is probably not trying to do anything illegal. They might be inexperienced or unaware of the rules — they’re only human, too, and are usually just trying to do a good job.

The best tactic is to trust your gut. If a question seems odd or out of place, smile and ask politely for more details about what the interviewer means. You might receive a completely satisfactory answer.

Ultimately, however, if you think that a recruitment decision is made on grounds that would be deemed illegal, then take professional advice and be prepared to fight your corner. There’s a reason the laws exist, after all.

Have you ever been asked inappropriate or unacceptable questions in an interview? Tell us below, and whether it had an impact on getting the job.