Statistically, 80 to 90 percent of you live outside of California. When you read reports of the drought in California, then, your reaction may be something like, “Bummer for those dudes. Patti, please pass the peas.” You might want to reconsider, though, because chances are this drought could affect you more than you think.

Saying the drought in California is severe is a bit like saying the Queen Mary is a nice little boat. At least one Bay Area scientist says that, based on historic tree ring data, the 2013-2014 rainfall season is on pace to be the driest since 1580 (not a typo). That’s more than 150 years before George Washington was born!

How much longer will it last? A bigger question is: Will this drought continue, and how will it affect you if it does?

The answer to the first question is not encouraging. The toughest previous droughts in modern recorded history occurred between 1987 and 1992 and the Dust Bowl era of 1928-1932. The peaks of those droughts coincided with major recessions. And the current drought is already considered worse than both of those.

But, compared to some of the droughts in California’s history, it’s still minor. Scientists at California State University, East Bay, looked at historical data by examining the rings of old trees. They discovered California has a history of what they call megadroughts: droughts lasting ten or twenty years in a row. That means things could get considerably worse before it gets better.

Where does the water come from?

Given that California is arid, the state can’t make it on its rainfall alone. Fortunately, it’s flanked by the Sierra Nevada mountains, the highest mountain range in the lower 48 states. It’s the snowfall in the Sierras which accounts for much of California’s runoff, mainly through the Sacramento and San Joaquin Rivers.

And that’s the heart of the problem. Below are two NASA satellite pictures taken exactly one year apart, on January 18, 2013 and 2014. You can see the stark difference in the Sierra snow pack between those two dates: 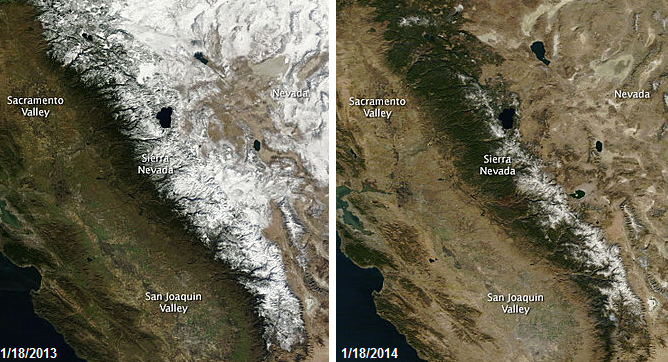 The aquifers have always been sufficient to see the state through droughts, and the subsequent natural run-off replenished them again. However, it appears they are now being depleted at an unprecedented rate, creating concern that their level may have reached an unsustainable level. NASA and the German space agency DLR, collaborating on the Gravity Recovery and Climate Experiment (GRACE) satellite mission since 2002, released this composite image of the aquifers in California’s Central Valley recently: 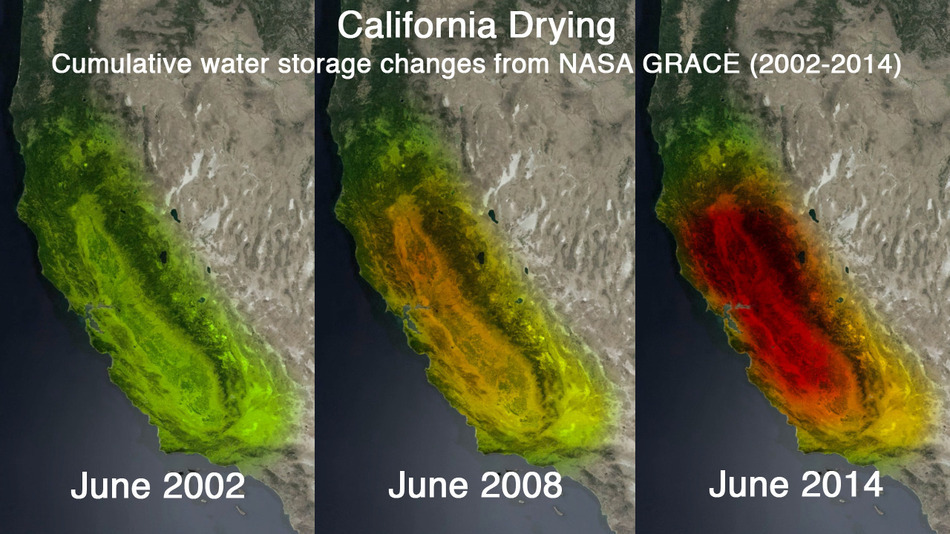 Who uses the water?

Contrary to popular opinion and bandwagon-jumping celebrities, it’s not irresponsible suburbanites with their backyard pools and manicured lawns that use the water; it’s nature. About half the State’s water is left alone, or “given to nature, ” to run off in streams and rivers. In times of drought, those sources are left untouched for the most part. Farmers use 80 percent of the remainder, and homeowners use only about 10 percent of California’s water.

Because farmers are by far the biggest users of water, they are the ones most affected by the drought.

What does this mean for you?

The Central Valley of California is to agriculture what Silicon Valley is to technology. Producing more food per acre than anywhere else in the world, it’s America’s top dairy producer and accounts for about two thirds of the entire nation’s fruits and nuts as well as over a third of America’s vegetables. It is also the largest producer of cut flowers.

Farmers have been adjusting for decades to rising water costs, switching their valuation metrics from yield per acre of land to yield per gallon of water. As a consequence, wholesale crop changes are taking place before our eyes. For example, cotton fields are being replaced by almond groves, because nut trees in general use far less water per dollar of revenue. Corn acreage in California has dropped 34 percent from last year; and wheat is down 53 percent, according to the USDA, either replaced with other crops or simply left fallow because there isn’t enough water.

It is obvious that food prices are going to rise because of the drought, and that has already started.

That’s not the worst part, though. California, on its own, is the world’s ninth largest economy, and agriculture is a significant component of its economic output. If the drought continues, thousands of jobs in California will be lost, hurting employment in the largest state of the union.

Dropping demand from the largest state in the union is bound to ripple through the entire nation to manufacturers of fertilizers, pesticides, seed and farm equipment, as well as food processors and transporters.

At a time when the nation’s economy is hanging in a delicate balance, that would be the last thing it needs. Think that’s perhaps a little dramatic? The last two major droughts peaked in 1932 and 1992, both low points in recessions (or in the case of 1932, depression). Given that food is the lifeblood of a nation, not just in terms of direct sales and employment, it’s not too much of a reach to expect a continuation of the largest drought in modern history to become a trigger for another recession, especially considering the fragile state of the American economy these days.

There’s not much you can do about food prices, except to brace yourself and not be surprised. However, there’s a lot you can do to prepare for another recession.

How do you prepare? In short:

Next time you see or hear a report on the drought in California, it might be worth your while to tune in. Forewarned is forearmed.

One Response to “How California’s Drought Will Affect You”