We have a nephew who lives in Switzerland whose wife recently gave birth to their second son. She stayed in hospital for an entire week and the blessed event cost them … nothing. Contrast that with this report from the New York Times, detailing the high cost of childbirth in the States. Obamacare is an attempt by the Government to “do something” about the problem. Whether you’re a fan or hater of Obamacare, there can be no doubt that the real problem isn’t the political party on either side of the argument — it’s the high cost of healthcare in America. That’s why I started to look beyond Obamacare to find other solutions.

Healthcare in America is the most expensive in the world, and it’s not even close. Anyone who doubts that can look at this presentation a year ago by the International Federation of Health Plans comparing healthcare costs in developed countries. Here is an example, showing the cost of a hospital day in various developed countries: 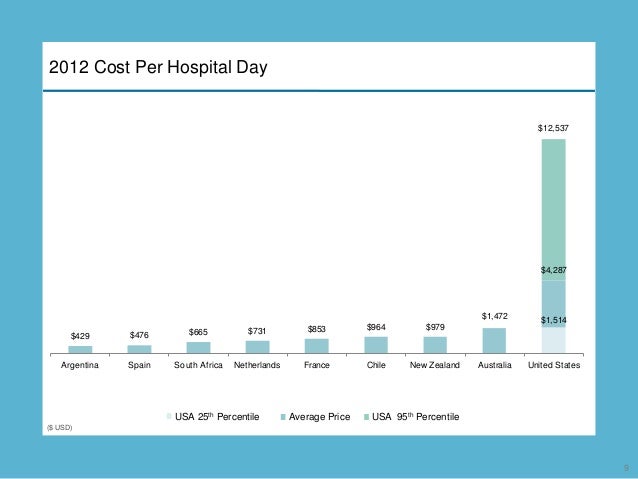 That’s right: A day in an American hospital costs almost ten times as much as in the next-most-expensive country. That’s true for just about every aspect of healthcare. Some may think, “Well, you get what you pay for. Our healthcare has to be the best if it’s so expensive.”

This chart from an OECD study shows the exact opposite. By just about any definition you care to use, the quality of care in America is among the lowest in the civilized world. This Reuters report puts America at the very bottom of that list.

The facts, then, are simple: Healthcare in America is among the most expensive, and worst, in the world. One of the big reasons is the actions of intermediaries who have nothing to do with your or my health and its care.

If your job offers you healthcare coverage, this escalation of healthcare costs may not concern you … yet. However, with the new law making it mandatory for those who can’t afford healthcare to get it, more people are looking for options that make sense for them. And so, while the public (and after-dinner) debates have been raging over the problem and the cure currently legislated, millions of people are beginning to discover something the health insurance industry doesn’t want you to know: There is a cheaper alternative, and it’s every bit as good as the current healthcare system.

That’s because it is the current system, only without the bureaucracy.

I discovered it a while ago, when my wife and I were both out of healthcare-paying jobs and were on our own. We have pretty incredible doctors, a husband-and-wife team. When we told them we didn’t have health insurance anymore, he said he’d work with us. In the years that followed, it was amazing to see how much we saved. To be fair, we are blessed with good health, so we were spared the cost of a catastrophe. But, knowing our situation, our doctor charged us $60 per visit and then conveniently “forgot” to charge us a few times. When I had plantar fasciitis, he told me how to simply walk it off — no charge. Unfortunately, when I had to do a colonoscopy, I had to pay “full boat, ” but even that specialist knocked down the bill to a level I suspect is way under what they would have charged an insurer.

A physician friend of ours confirmed that this quiet underworld of cash billing for healthcare has been growing. Doctors hate the insurance bureaucracy and they say most of their escalating expenses are due to billing specialists they need to add to their staff to push the red tape up the hill, to mix metaphors. He recently quit from the practice he was part of to open his own new practice to simply provide healthcare without the red tape — for much less than his old firm had to charge the insurance companies.

You can dismiss these as isolated anecdotes, but they are part of a growing trend. The mainstream media are beginning to pick up on it too, as you can see from these articles in CNN/Money and the New York Times.

As with any new movement, the number of options available to someone looking for treatment outside of traditional, insurance-driven healthcare is growing daily. Two blogs focusing on this growing area with news of evolving resources are The Self-Pay Patient and Healthcare For Less. The author of the first blog, Sean Parnell, also published a book called “The Self-Pay Patient, ” and it contains comprehensive lists of resources available to anybody who wants to go this route. (Disclaimer: Not affiliated. I bought the book for full retail.) His blog contains updates to the resources listed in his book, so together they make a must-have resource directory for a space that’s evolving rather rapidly. One example is the growing list of cash-friendly doctors across the country.

An interesting alternative to traditional insurance few of us would have thought of is healthcare-sharing ministries. These are voluntary, nonprofit organizations of people who agree to share each other’s medical bills, which is similar to how insurance operates. Most are based on a certain faith — but one,  Liberty HealthShare, has no limitations regarding religious beliefs. Members of these organizations are exempt from the tax to be imposed on those not carrying mandated Obamacare health insurance.

Other resources worth checking out are short-term health insurance, critical-illness insurance and fixed-benefit insurance. Because these are rapidly growing sub-fields of medicine, your best bet is to Google them as search terms from time to time to get up-to-date information.

Self-pay medicine is not the most suitable option for everybody, especially for:

If you’re stuck in a place where you have no recourse to affordable healthcare, you may want to talk to your doctor to find out if they have options outside of their traditional insurance-driven system. Beyond that, you might want to make use of the resources listed above to find coverage options which offer protection against big-ticket medical expenses.

Chances are we won’t recognize the healthcare landscape in America ten years from now. Rather than wait and be caught unawares, it’s worth checking out this evolving arena. You never know when something might pop up that could make total sense for you and your family.

We were on my wife’s employer’s health insurance plan; but after she retired, we had to decide how to proceed. We received the full information package from a Christian healthcare-sharing ministry, called CHM (Christian Healthcare Ministries). They offer three participation levels: Bronze, Silver and Gold. They don’t call them plans, and they don’t call what you pay every month a premium. A nonprofit ministry, what they do is create a network where members share their healthcare expenses.

It is a lot less than what we would call traditional health insurance. Their participation levels break down as follows:

They don’t pay healthcare providers; they only reimburse you. The deductible (they don’t call it that, but that is what it amounts to) varies according to your participation level: $5, 000 for Bronze down to $500 for Gold. Reimbursement usually takes around three months or so, so a member needs to have the means to carry their medical costs for that period until reimbursement is made.

If you have affordable coverage, you’re fortunate. For those who don’t, for instance those who worked hard to retire early, self-pay medicine is a rapidly growing area with the potential for substantial savings over traditional health insurance.

7 Responses to “Have you considered these low-cost healthcare options?”