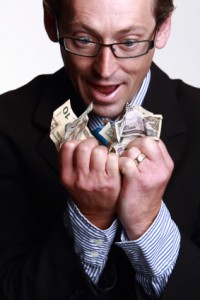 This is a guest post from Jesse Michelsen of Personal Finance Firewall, a site where he shares tips for making better financial decisions so you don’t have to go hungry. Jesse also contributes to the Money Crashers personal finance blog.

Ah, the Donner Party. One of the most grotesque, bizarre and puzzling stories from the early days of America. While I’m sure the memory of the event and tales passed down from its survivors have haunted children’s dreams for years and years, there is plenty we can learn from the Donner Party and what they went through.

For those of you already lost, the Donner Party was a group of American pioneers that left Illinois in 1846 for a paradise called California. Through countless delays, bad luck, and horrible weather, they ended up stuck in the Sierra Nevada mountains between October and April of 1847.

In the end, about half of the 87 members of the original party died; even more sadly, many of these people were eaten by the surviving members. Yes, eaten. Why are we talking about this on a personal finance blog? Well, in this horrific tale lies four interesting lessons…

Most of the Donner Party members were heading to California to seek greater wealth, but the thing is that they were already wealthy. George Donner, who happened to be 62 years old when he left for California, never needed to work again. He and his brother Jacob, who joined him on the fateful journey, had amassed a great deal of wealth as farmers prior to their adventure.

James Reed, who was the original leader of the Donner Party, was a wealthy Irish businessman. He was rich when he left for California, but the idea of more wealth and endless possibilities drove him to take the journey. He was so rich, in fact, that his family’s covered wagon was a two-story wagon, complete with shock absorbent seats, a stove, and a second level which boasted beds for the travelers. Their wagon was referred to as the “Pioneer Palace Car.”

I’m all about shooting for the stars, but there comes a point in life when you have to say, “Okay, I’m doing pretty darn good for myself financially. Let’s stop here and enjoy the fruits of my labor.” In your own life, if you’ve done a good job of planning for retirement, there should be no need to take major risks.

One of the things that got the Donner Party started was a document called The Emigrants’ Guide to Oregon and California, published by a guy that had never actually taken the route he was proposing. This guide was written by Lansford W. Hastings in order to entice pioneers to settle California, and it clearly worked.

The shortcut in Hastings’ guide was supposed to cut several hundred miles from the journey. In reality, this shortcut added miles instead of taking them away, and ultimately tacked an additional month to the already-long six month journey.

The financial world is similar. There is always someone preaching a shortcut to wealth and a way to get rich quick. But with finances and wagon trains, it’s best to stick to the beaten path. If you follow Hastings’ shortcut, you might end up eating your family!

Similarly, if you take a shortcut on your taxes, you might trip an IRS tax audit red flag. And if you invest in that “sure bet” you overheard someone talking about, the only thing you can be sure of is that you’ll end up disappointed and probably broke.

3. There’s always a light at the end of the tunnel

After they crossed the Great Salt Lake Desert, the Donner party missed their chance of making it over the Sierra Nevadas by just one day due to heavy snowfall. It was during this storm that they began to eat their dead. They had already eaten anything they possibly could, including tree bark, animal bones, and the oxhide from the roof of their miserable shelters, so human flesh was all that was left.

Well, not everyone resorted to human flesh; the Reed family decided to resist this new strategy. In fact, they are the only family that didn’t turn to cannibalism during their six month stay at Chateau de Donner by the lake. They are also the only family to all live and make it out of the horror intact.

The lesson here? No matter how dire your financial situation seems, no matter how much debt you have, and no matter how bleak the possibilities, you never know how close you may be to relief. If you give up hope or if you do something you know you will regret, you’ll feel far worse once things turn around for the better.

4. Think outside the box

For a quick entrepreneurial lesson, look no further than Donner Party survivor Lewis Keseberg. He opened up a restaurant and profited immensely from the novelty of his story. Be creative and entrepreneurial in any situation, and you could escape that 9-5 worklife by starting a successful small business or, at the very least, earning some extra money!

Even in the craziest stories, like that of the Donner Party, there are some truly simple yet valuable lessons to be learned. These four lessons can help you get well on your way towards living a financially stable and happy life, two things we all strive for! Keep your eye on the ball, and you’ll eventually learn what financial freedom feels like.