In response to my earlier post about one of our credit cards being closed due to inactivity, long-time reader and regular commenter BG mentioned that he and his wife have upwards of 150 credit cards. They’ve apparently been collecting these cards in an attempt to illustrate the poor management of mega-banks like Citi.

He went on to say that none of this seems to have adversely impacted them, as their credit scores are well over 760 and they’ve just recently closed on a mortgage refinance. In other words, their credit is just fine, thank you.

Intrigued, I followed up with him and he offered to send me a photo for publication on FCN. And so, without further ado, I present to you BG’s credit card collection… 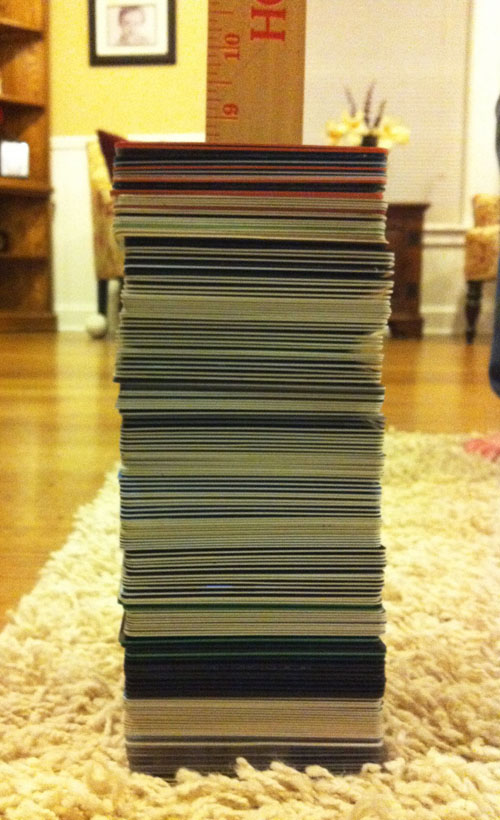 Apparently half of these are his and half are his wife’s, so tey don’t all trace back to a unique account. But still. Wow. That’s a lot of credit cards.

The stack of black cards near the bottom are all the same type of Citi card. Apparently their approval system is such that they’re willing to approve him for a new card every month.

As for his total credit limit, he hasn’t added it up (yet — if he does, I’ll update to let you know) but he thinks it’s “probably enough to buy a pretty nice house, if that were possible to do with credit cards.”

He says that he typically uses each card enough to get the associated signup bonus  and then sticks it in a box never to be used again — other than for photo opps like this, I guess! 😉

Honestly, I’d be more interested in hearing about the sum total of his bonuses than his credit limits, but both would be interesting tidbits.

So, dear readers, can any of your credit card collections compete with BG’s? Let us know in the comments.

More generally, if you have any amusing, entertaining, or informative finance-related pictures, please don’t hesitate to get in touch. Hit me up with a brief description using the contact form and I’ll get back to you ASAP.