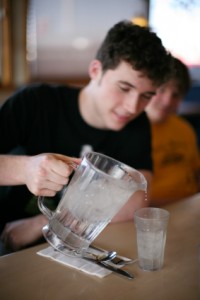 On the way to work the other day, I stopped off for a cup of coffee. Yes, I’ve started drinking coffee — though I usually brew it at home — but that’s not really the point.

The point here is that, while I was at the coffee shop, a guy walked in and asked for change for a dollar and a cup of ice water. He then proceeded to buy a newspaper from the machine outside and come back in to sit down and read the paper while sipping his free (to him) cup of water.

Maybe I’m just grumpy, but… Seriously? Who has the audacity to walk into a business, ask for a free cup of water (which actually costs the coffee shop money), and then take up space that could be used by paying customers.

Don’t be cheap. Either buy something or don’t go there. Sure, he bought the paper. But that was from a machine outside, and that money doesn’t go to the coffee shop. It goes to the newspaper.

Yes, they have a sign on the door saying that their space (and internet, etc.) is reserved for paying customers. The guy behind the counter could have refused, but it was an awkward situation, and he let it slide.

What do you think? Was he out of line? Or is this an acceptable practice?