Is there a new movement happening in your backyard that you are unaware of? A new reality television series has probably never been the impetus behind a major change in how we live, but could this one be different? The show in question is called “Tiny House Nation, ” and it kicked off earlier this month on FYI, an A&E cable channel.

There is a growing interest in the movement, which goes by many names, like “small houses, ” “micro-homes” and the ever more popular “tiny homes.” There are as many definitions of what a tiny home is as there are definers. Everyone agrees it’s smaller than about 700 square feet of living room, but most high-profile-tiny-home advocates celebrate postage stamp homes: less than 250 square feet.

Now, just about everyone who has left home and struck out on their own started with a small apartment not much bigger than the aforementioned 700 square feet. However, the general attitude always used to be: This is a place to be coming from, not going to. The fact that you could live there didn’t mean that you wanted to live there forever.

That attitude is starkly visible in the data. From these Census Bureau numbers, you can see how Americans have disdained smaller homes (orange line) for what has become known as “McMansions (blue line): 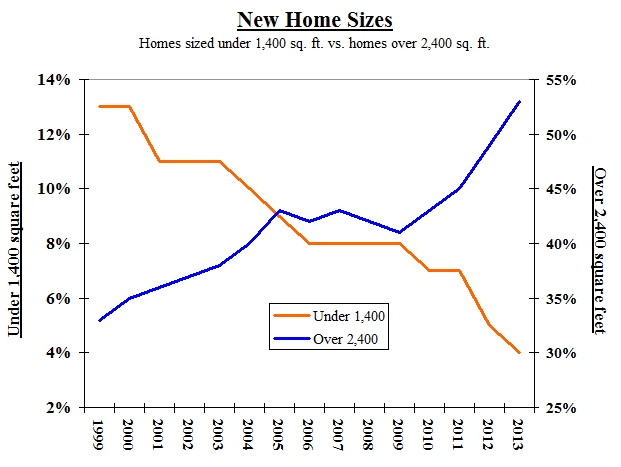 The numbers clearly show that the tiny home movement hasn’t gone mainstream just quite yet. However, that might be changing. If you look at popular mainstream media, from NBC to Huffington Post, you’ll observe more and more discussion of the tiny home movement, usually with the breathless proclamation that this could be the next big thing. There is also, as you would expect, a growing chorus of blog sites dedicated to the phenomenon, from purely talk to help-for-pay.

What prompts the sudden interest in what most people gladly left behind?

According to the Census Bureau, the typical cost for the average house of over 2, 000 square feet is well over $250, 000. In contrast, the average cost of a tiny house is less than one tenth of that.

Mortgage debt is the number one form of debt in America today, and it amounts to over $13 trillion, or about $100, 000 per household. In an era when the American Dream seems to be fading for many, getting out of debt is acquiring a compelling attraction, and what better way to get out of debt than to shift your thinking about your living quarters?

Until the 1950s, most houses averaged around 1, 000 square feet. Tract homes were introduced in the ’50s and dropped the cost of housing considerably. That, and the availability of mortgage debt, soon enticed most Americans to increase the square footage they live in (and mow) to where it is well over 2, 000 square feet, not counting garages.

The fact that millions lived quite well, for so long, in 1, 000 square feet is beginning to resonate with an increasing portion of the population. If it’s been done before, it can be done again, only this time with better planning and gadgets.

More people are becoming aware of the burden unnecessarily large homes impose on the planet. The main item is energy consumption; but it extends to other items, too, like materials used in construction and water usage. The smaller the house, the smaller the footprint (literally) on the environment.

Why Hasn’t Tiny Housing Taken Off Yet?

The environment may appreciate a switch to tiny houses; but the environment, unfortunately, doesn’t have its own bureaucracy, banks and code. We live in a society built to accommodate the status quo, and any new innovation has to either comply with legacy requirements or wage an uphill battle to get taken seriously.

So, why is the tiny home movement not being taken seriously yet?

During the Great Recession, a few more people were motivated to scale down their housing than usual. You can see both the blue and orange lines in the chart above leveling out during that dark period. However, as soon as the economy recovered, America returned to its McMansion ways and continued building fewer small homes and more mini-castles.

Cars didn’t become more fuel-efficient until the oil crisis of the ’70s, and it seems the tiny home movement will need some external event to give it a significant boost in awareness and popularity.

Most people are simply not aware how advances in architectural planning have enabled us to live comfortably in a smaller footprint. Most of the tiny homes featured in TV and magazine articles are extreme: 200 square feet or less. That might cause many to nod in agreement; but few would change their habitat.

However, in order to make those microscopic homes habitable, owners and architects have come up with ingenious solutions. Simply by applying those inventions, it would be possible to make a 1, 000 square foot home as livable as a McMansion. However, until the majority of home builders and buyers become aware of these innovations, their widespread adoption will languish.

Any government is a reflection of its people and their culture. In a culture of growing homes, it is not surprising to find that local governments and banks both tend to associate small homes with poverty and blight. As a consequence, when you attempt to get permission to build your little 300 sq. ft. marvel of architectural ingenuity, you’re likely to run into a bureaucratic brick wall.

The way most tiny home builders are getting around this hurdle at the moment is to build their homes on trailers. That makes a home a non-permanent structure, which doesn’t need to comply with any codes.

That immediately raises the question: Why not simply live a motor home or travel trailer, then? Most RVs are designed for temporary vacation types of living. Their layouts are not designed with permanent living in mind, and they choose construction materials for weight saving, not durability. But, more than that, a motor home simply doesn’t “look like home.”

Reading about the tiny home movement and watching the TV show is, at the very least, entertaining and educational. If you are really serious about cutting your expenses and getting rid of debt, a tiny home is a doable alternative. That’s not to say it’s an approach without sacrifices and compromises.

But what good things in life are?

What do you think? Is this just an oddity, or a portend of something as profound as compact imported automobiles turned out to be?

5 Responses to “Do You Know About This Movement?”