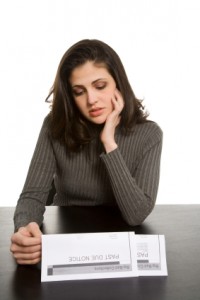 It’s been awhile, but we’ve once again found ourselves in the crosshairs of a collection agency. Long-time readers might recall that we were contacted by a collection agency a few years ago in relation to a medical debt that wasn’t actually overdue. In fact, that collection notice arrived less than 30 days after the first bill was sent, and it crossed in the mail with our check to the payee.

This time around, we’ve found ourselves in trouble with a local medical facility, albeit a different one. Our oldest son visited the emergency room at the end of April and that visit cleared insurance in early May. The bill was supposedly in the mail shortly thereafter, but we never received it.

Around here, it’s standard practice to send a bill with a due date 30 days in the future, and then to send at least one, if not two (or even three) followup notices before sending a medical bill to collections. That would mean that we should have received a second bill in July (marked 0-30 days overdue) and another in August (marked 30-60 days overdue).

Instead, it appears that they sent us to collections in mid-July, about two weeks after the initial due date. That was it. No second notice or followup of any kind. Gee, thanks… A possible ding on the good old credit report thanks to a slightly late $20 charge that we never received.

Given that we hadn’t received any sort of documentation, I had to do some digging to figure out what this bill was related to. Fortunately, our health insurer has all of that information on line so I was able to look it and figure it out. From there, it was a matter of contacting the billing office.

Sure enough, she confirmed that they sent a single bill, and then turned us over to collections shortly after it was due. Great policy, huh? The good news is that she said we have 30 days to pay before it would be reported to the credit bureaus. I had the choice of paying them directly or going through the collection agency, and I opted to pay on the spot.

As before, I’m keeping it short and sweet, simply stating that I’m writing to dispute the validity of this debt, and letting them know that it’s been paid and that we can provide proof of payment. As per the Fair Debt Collection Practices Act, they can’t contact us, attempt to collect, or report anything to the credit bureaus if they can’t validate the debt. And they won’t be able to because we’ve already paid it.

If you find yourself in a similar situation, be sure to follow up in a timely manner – within 30 days of the date on the collection notice at the very latest. And be sure to communicate in writing, via certified mail if at all possible. That way they can’t deny having heard from you.

7 Responses to “Dealing With a Collection Agency (Again)”