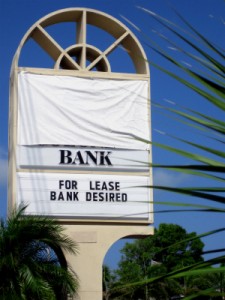 It’s been awhile since I’ve talked about failed banks. Back in the height of the financial crisis, bank failures were all the rage and the media couldn’t stop talking about it. But we don’t hear about it nearly as much anymore.

Is that because bank failures have slowed down? Or because we’ve become immune to the news? Well…

The FDIC keeps a scorecard of sorts in the form of their failed bank list.

Thus far in 2013, there have been four bank failures. Looking back…

For context, there are 7, 053 FDIC-insured institutions in the United States as of this writing — so maybe 0.25% of them will fail this year. But, as long as depositors have been respecting FDIC limits, it’s all good.

If you’re wondering about the geography of bank failures, Georgia led the way from 2008-2011 with 74 failures. Florida wasn’t far behind with 58, and Illinois was in third with 47. California (38) and Minnesota/Washington (17 apiece) rounded out the top five.

Interestingly, I witnessed a bank takeover a couple of years ago. It was a Saturday morning (takeovers typically start at close on Friday) and I was taking our kids out for breakfast.

As I drove to the restaurant, we passed by a local bank. The entrances to the parking lot were blocked by large black SUVs and there were a number of people in suits milling around at the entrance. At the time, I didn’t know what was happening, but I later learned that I had just witnessed an FDIC takeover.