When is the last time you got into a heated argument about cars? Cars in general are not controversial. Yes, there is the odd low-key Chevy vs. Ford thing from days gone by and that sort of thing, but most people generally don’t get worked up about cars, arguing about them after dinner in mixed company.

That changed a decade or so ago, when gas prices spiked and the media fueled public outrage over behemoth SUVs like Ford’s Expedition and Chevy’s Suburban. The “darling of the day” solution became the Toyota Prius. Californians were so enthralled with it that they pushed through legislation allowing single drivers to use the carpool lanes if they drove a Prius. If you’ve ever lived in the Bay Area or the L.A./Orange County sprawl, you know there is no ground on earth holier than their freeway carpool lanes. Other than winning the lottery, no fantasy occupies commuters’ minds more than finagling a way to zip along that ribbon of greased lightning while the rest stew in their mobile prisons, stuck listening to talk radio.

The Prius became the first car in eons that people talked about when they met for a little libation, or even just standing in lines. Sales went through the roof and dealers had waiting lists. Hollywood celebrities, always chasing the latest cool, hid their blinged-up Escalades — and Cameron Diaz, Harrison Ford and others made sure cameras saw them driving to the 2003 Academy Awards in their Priuses. (Actually not theirs, just loaners from Toyota, but cameras can’t tell the difference.)

All that chatter made the little car the most controversial thing on four wheels since the Edsel. Everyone seemed to sing its praises.

Not everyone, though. Jeremy Clarkson, on the top-rated British show Top Gear, never missed an opportunity to bash the car and humiliate anybody who confessed to even sitting in one, let alone owning it. The TV show South Park parodied the Prius parade in a 2006 episode, citing its excessive emissions of “smug.” Elsewhere, I read a lengthy rant from someone in the Bay Area incensed by an extreme Prius driver driving less than 20 mph on a freeway, windows rolled up while sweating, obviously minimizing the wind drag of open windows while keeping the AC off. Why he didn’t change lanes and blow by Planet Earth’s last savior escapes me, but that’s not the point.

The point is the Prius excited more passion than any Lamborghini or Yugo ever could, or ever did. And that passion is centered around a lovely word in these quarters: saving. The gas savings make it easy on the planet as well as your wallet.

How much is this saving?

You’ve no doubt read numerous articles and posts claiming the Prius is the best thing since recyclable tissues, and others which say that’s baloney. So, what’s the truth?

There are many variables to skew the numbers this way or that. In fact, most articles I read only selected the numbers they quote to favor their stance. In pursuit of the truth, I took all costs, not just gasoline, over a five-year period, doing my best to track them down from neutral sources (i.e., sources that didn’t have an axe to grind in the debate).

It’s impossible to avoid picking a number not favoring one position or the other, though, so I decided to favor the Prius where there was latitude for choice. For instance, I picked a gas price of $4 a gallon for the entire five years, making the Prius’s fuel economy count for more. (A lower price obviously negates that benefit.) I also used the EPA “City” mileage number in my calculations. Not all miles are driven in city conditions, but I had to pick a number, and that’s the one that favors the Prius the most.

A glimpse at the IRS mileage reimbursement rate components shows the biggest car expenses are:

All the other costs add up to roughly the same as insurance, which is not that different from car to car, so I ignored that. (The goal isn’t to determine the total actual cost; it’s to see where and how big the difference is.)

To get depreciation, I looked at three cars from 2009, to get a five-year number:

I found the MSRP of a mid-level model for each car, and then looked up the current Kelley Blue Book private party price for it in “good” condition with 60, 000 miles (1, 000 miles a month). The difference gives us the depreciation of each car over five years.

Insurance was a little trickier to get because, in order to give you an accurate quote, all of the online sites like Insurance.com and the individual carrier sites want to know everything from your firstborn to the last time you read a blog (just kidding, but not by much). I am astounded by how many extraneous variables go into car insurance cost — my social security number even makes a difference (they say). I got quotes for each car being the only car, so no multiple-policy discounts. My age, driving record and occupation probably make for more favorable rates than a young delivery driver, but at least it’s the same assumption across the board. Bottom line: Your car insurance rate is affected much more by who you are (and where you live) than by what you drive.

Okay, so what’s the number? 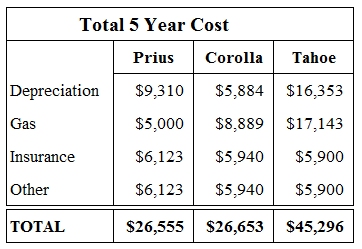 It’s as close to a tie between the Prius and the Corolla as you can get, basically. What you gain in the cost of gas you lose in additional depreciation. (And if you had any illusions that your Tahoe had any redeeming merit in the economy wars, it’s time to go and hide in a corner.)

So, the Prius can be the lowest cost vehicle for you, but not by much. And to get that, you need to:

In real life, odds are a Prius is not going to be as economical for you as a Corolla. In the past decade, the Prius’s advantage has been eroded as almost all cars get better mileage than a decade ago.

In closing, forgive me for not resisting the temptation to note that your friendly government does not intend to let this good work go unpunished. Back when they raised taxes on gasoline, a big justification was that you, miserable gas-guzzling consumer, need to be saved from yourself. Noble public servants that they are, they did their duty by raising gasoline taxes to give you a bigger incentive to conserve precious fuel.

It worked. However, as gas consumption dropped, so did their gasoline tax revenue. Their solution: simply add other taxes. Michigan, for example, is floating the idea of taxing you on miles traveled,  in addition to the existing gas tax. Why indeed should they suffer when you do what they want you to? Next time your government tells you they’ll increase your taxes for some social good purpose, ask what will happen if they reach their goal.

11 Responses to “Are You A Prius Lover or Hater?”