Believe it or not, stocks have been enjoying a bullish run for nearly four years. In fact, the Dow topped 14, 000 for the first time since 2007 and is near it’s all-time intraday high 14, 198 which happened during October 2007.

Of course, as I write this the markets are in retreat, and there is much hand-wringing about where the market is headed from here. With that in mind, I wanted to highlight an interesting graphic that I first ran across on The Big Picture. 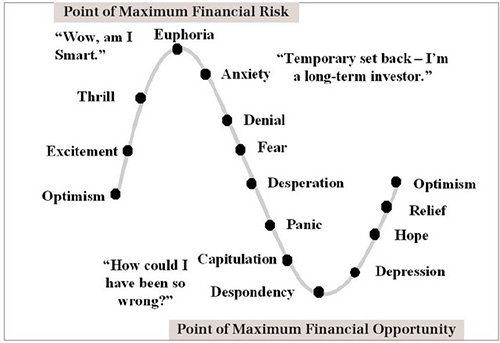 Given your gut feelings, along with what you’ve been reading in the media coverage of the stock market, where do you think we are?

I’d say that we’re clearly on the upswing, having passed through despondency, depression, hope, and relief since the market bottom in 2009. But I don’t think people are excited, thrilled, or euphoric. So that would put us somewhere in the neighborhood optimism.

If I had to be more specific, I’d say that overall investor sentiment is currently “cautiously optimistic.” Of course, that’s just my wholly unscientific perception.

While the graphic above is equally unscientific, I do think that the overall message is worthwhile. As Warren Buffett has said:

4 Responses to “Anatomy of a Stock Market Cycle”