What? Is the last recession even over yet? Isn’t it a little early to begin talking about the next one? Yes, and no.

According to all official sources, the Great Recession bottomed out in 2009. That means the recession has officially been over for four years now. This chart from the Federal Reserve shows that in the few years since then, our economy has reached an all-time high. 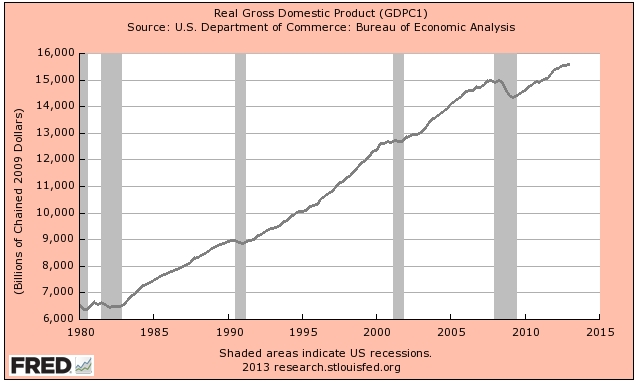 And lest you think this is just the government trying to pull the wool over our eyes, you see the evidence everywhere. The stock market is at an all-time high, home prices and sales have recovered most of what they lost and new car sales are reaching multi-year highs.

So, why the talk about the next recession?

Because there is one coming. There always is. See those grey bars in the Fed’s chart? Those are recessions, as the Federal Reserve defines them. If you look back at the economy for the past 200 years or so, it’s inescapable: we have a recession every 7-10 years. Almost like clockwork.

Given that we’re four years removed from the last bottom, that means we’re somewhere close to the halfway point to the next recession. Are you prepared for the next one?

No, this isn’t one of those doomsday alarmist posts saying the world is going to end tomorrow in the depression that will wipe you off the face of the earth. Nobody can predict the future with total accuracy, but it’s probably safe to say the next recession might hit anytime between 2016 and 2019.

How far away is that?

Answer: not that far at all.

The economy moves in cycles or waves. Here’s a different chart showing that phenomenon a little more clearly:

In other words, we are always at some point on the next cycle, going either up or down. And if we’re going up, we will go down at some point in the not-too-distant future.

This isn’t just interesting academic knowledge: it’s something that probably impacted your life quite significantly in recent years.

And it definitely will again in the future.

Now, ask yourself: if you knew the last recession would strike around 2008/09, would you have done anything differently? Maybe you wouldn’t have bought that house in 2006. Or maybe you wouldn’t have taken on as much extra debt through a refinancing as you did. If you did either, you’re probably one of the 25 percent or so of all mortgage owners who were still underwater on their loans.

If you knew in advance the Great Recession was going to happen, and you wanted to either buy your first house or move up a bit, you could have waited just a few years and gotten that new house or the upgrade for much less money. You might not have changed jobs or bought that new car. Or you might have resisted the temptation to join the mighty throng of house flippers. How much better off would you be today?

If you only knew.

But you know now. More than that, you have a few years of warning. If you heard on June 1, 2008 that a recession was about to hit in a couple of months, there wouldn’t have been much you could do about it. It takes more than a month or two to prepare for a recession. In fact, it takes several years.

Well, now you have those several years. Nobody knows exactly when the next recession is going to hit, and people who tell you they do probably have a New York bridge in their back pocket with your name on it. But, while we may not know exactly when it will come, we know it’s not going to be all that long any more.

That means you have a few years to prepare.

How do you prepare?

There are several things you can do to prepare for the next one:

1. Get rid of debt. Debt is by far the biggest killer in a recession. When lean times come, we all have the ability to scale back what we buy and do, with two exceptions: debt and rent. You can’t cut those.

Your best solution is to get rid of debt with a passion these next few years. It won’t be fun, and it won’t be easy. But when the next recession rolls around, you will be very grateful you made the sacrifice.

2. Stay put. In the next few years, banks all around you will inundate you with offers for easy mortgages. Everyone you know will be buying nicer homes and shiny new stylish appliances. Don’t do it. Wanting any of those things is not wrong, it’s just that you can get them all for less in the next recession. Why settle for just a new refrigerator when you can add a stove and countertops for a fraction more? Isn’t that a much better deal?

3. Save, save, save. After you paid off your debt, save like crazy. Don’t worry about returns or interest rates, just put the money away in a plain old savings account. When the recession comes, you’ll have enough to ride out any shortfall in your income. But, much more fun, you’ll also be armed to the teeth to go on the mother of all shopping sprees at all those 75 percent off and going out of business sales.

In fact, someone pointed out to me that if you sold your house when the market reaches the next frenzy (as it always does) and put the money in the bank, you’d be able to take an around-the-world cruise for an entire year and be able to buy back the same house in foreclosure with what’s left. That’s probably an exaggeration, but you may well be able to pull off something close to that.

4. Be patient. It has been said that debt is nothing but impatience. At the end of three or five years, you’ve paid the same amount of money, but with debt you just get it quicker — that’s the only difference. Oh, and the interest, of course.

Forewarned is forearmed, they say. You’ve now been given something you didn’t get last time: good warning with plenty of time to get prepared.

5 Responses to “4 steps to prepare for the next recession”